In this short extract from my novel The Girls from Alexandria, ten-year-old Nadia gives her take on the events of Suez.

It began on the twenty-sixth of July when I was ten and a half years old, or, as I preferred to put it, nearly eleven.

The whole thing was about a canal and a dam. President Gamal Abdel Nasser was a big man with a muscular jaw and impressive teeth that he showed all the time.

That night in 1956 was the fourth anniversary of the revolution. Nasser celebrated by giving a long speech right here in Alexandria, in Mansheya Square by that statue of Mohammed Ali Pasha wearing a turban and brandishing a sword as he sits on his horse.

I enjoyed listening to Nasser on the radio because I could understand his speeches. Unlike other important men who make themselves sound clever by using formal Arabic, Nasser spoke a colloquial language that every Egyptian could follow, even a child of not quite eleven. That, I thought, was much cleverer.

Whenever anything interesting happened, I was sent to bed instead of being allowed to stay up, so I missed the big speech. Mother told me about it the next morning, which was hardly the same thing. I was especially sorry to have missed the firemen dispersing the crowds in Mansheya Square.

We were all upstairs by the air conditioning which was on at full blast against the sweltering heat. Father and Mother told Simone and me that the Suez Canal now belonged to Egypt instead of France or Britain. That meant it would raise lots of money for Egypt and would pay to build a High Dam at Aswan.

It was a good thing that the Suez Canal had been nationalised. Unless you happened to be Britain or France, I supposed.

For a while after that, I forgot about canals and went back to puzzling over Uncle Selim. Selimkept a thin book in his pocket. Whenever I took an interest in it, however, his reptile eyes swivelled towards me and I’d have to look away. I only glimpsed it once before he whisked the little book back into his breast pocket.

When term started, I consulted the encyclopaedia in the school library. Papyrus came from a plant in the Delta, though that did not enlighten me about Selim. For good measure, I looked up palimpsest as well, its entry being nearby. That was all about scraping something off a parchment to use it again.

As it turned out, I didn’t get a chance to visit the school library for ages after that. In October, some countries got angry with Egypt for taking a canal that should have been Egyptian in the first place. Father and Mother did not fully explain it but, in no time at all, France, Britain, and Israel all ganged up to declare war on Egypt.

Abdou stuck blackout paper on all the windows, and every night we heard air-raid sirens and anti-aircraft guns. That’s what my horrid cousin Victor called them. With schools shut, he was in our garden more than ever. He told me that the guns were at Smouha, barely a few kilometres away, but I insisted that didn’t scare me at all, so there.

Simone knew better. She hugged me and reassured me that everything would be all right. ‘You can sleep in my room,’ she said.

I padded into her room when the lights were out, leaving my teddy bear behind. I didn’t want my sister to think I was still a baby. What with the guns and Simone’s feet, I barely slept at all while sharing her bed, but at least there was the chance that some of her courage would rub off on to me in the night.

The Girls from Alexandria is out on April 1, and features this stunning cover designed by Emma Rogers.

I’ve blogged before about Suez, because it’s when my mother wrote her first book. This week, Nadia, a character from my next novel, gives her own take on 1956.

It began on July 26, when I was ten and a half years old, or, as I preferred to say, nearly eleven. The whole affair was about a canal and a dam.

Here’s the crucial thing: President Gamal Abdel Nasser was most interested in canals and dams.

Nasser was a very big man, with a strong jaw and huge teeth that he displayed whenever he smiled. That night in 1956 was the anniversary of the revolution, so the president celebrated by giving a long speech, right here in Alexandria, in Mansheya Square, where there’s a massive statue of Mohammed Ali Pasha, wearing a turban and brandishing his sword, sitting atop his horse.

As usual when anything interesting happened, I had been sent to bed instead of being allowed to stay up. My parents told me about the speech the next day, which is hardly the same thing. I relished the idea of Nasser brandishing his words like a sword, and I was especially sorry to miss the firemen dispersing the crowds.

Although I had no real opinions on politics, I liked listening to the president on the radio. Unlike a lot of important men who like to make themselves sound clever by speaking in a formal version of Arabic, Nasser spoke a colloquial language that every Egyptian could understand, even a child of nearly eleven. That, I thought, was much cleverer.

The day after that big speech, my sister Simone and I sat in the upstairs living room right by the air conditioning, which was on at full blast as it was sweltering. Father and Mother explained to us that the Suez Canal was now going to belong to Egypt instead of France or Britain. As a result, it would raise lots of money for Egypt, and would pay to build a High Dam at Aswan.

Mother actually put down her embroidery during this conversation, so it must have been significant. Quite how significant, I did not wholly grasp. The main thing was that the Suez Canal had been nationalized. That was a good thing, wasn’t it? Unless you happened to be British or French, like some of my friends from school.

In October, a few countries turned out not to be so happy about Egypt having the Suez Canal. Our parents did not explain that very clearly. Meanwhile, our nanny Rashida lit more candles than ever to the Virgin Mary and to St Anthony.

Even when she wasn’t praying, Rashida went about muttering to herself. I thought I heard her say that things had been much better under King Farouk, but, when I asked her to repeat herself, she flatly refused.

It got a lot clearer when France, Britain, and Israel all ganged together to declare war on Egypt. Every night there were air-raid sirens and anti-aircraft guns. Victor, my pain of a cousin, kept going on about it. With our schools shut, he was unfortunately at our house more often than ever. According to him, the guns were as close as Smouha, barely a few kilometres from us. I pretended to be unconcerned.

Every bedtime, Mother told Simone and me that things would turn out all right. We had blackout paper on all the windows now. It was all going to be fine, Mother said.

It did however change things for many of my friends, and for my teddy bears, at least one of whom was British. 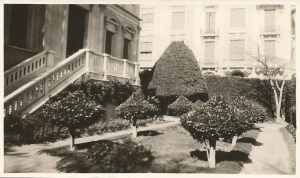 You may also like How My Mother Wrote Her First Book