If you know much about sepsis, chances are the condition has affected your family.

Sepsis has a high mortality and kills 37,000 people a year in the UK, about 1,000 of them kids. So this week I’m parking the levity and using my blog to sum up what you need to know about sepsis. 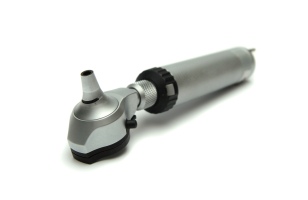 Understand what it is.

Sepsis is when the body responds to severe infection in such a way that it attacks its own organs and tissues. Without treatment, this quickly leads to organ failure and death.

Most people have heard of blood poisoning (septicaemia) which is much the same thing. But doctors now prefer the term sepsis because there isn’t always blood poisoning in this condition.

Sepsis isn’t exactly a household name – yet. Personally I think ‘sepsis’ sounds weaker than either septicaemia or blood poisoning, but we’re stuck with the term that scientists agree on.

The symptoms depend on age, but the main point is that there isn’t any one specific sign like, say a swollen jaw with mumps. A child with sepsis can have a high fever, or an abnormally low one. The younger the child, the vaguer the symptoms.

Here are some signs to look out for in children (from the UK Sepsis Trust’s Paediatric Pocket Guide): 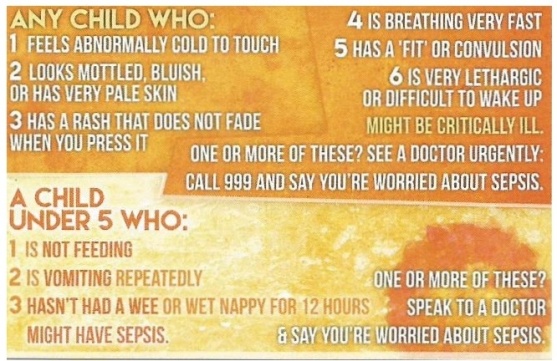 And here are some signs to watch out for in adults (from the UK Sepsis Trust’s excellent Symptom Checker card):

If I could highlight just two consistent points about sepsis, they would be these:

You or your youngster will be more unwell than expected.

Understand who gets it.

Anyone can develop sepsis from a bacterial infection (or sometimes a virus or fungus). But some are more at risk, like the very young, very old, pregnant women, diabetics, and people on long-term steroids.

The initial infection can be a serious one like meningitis, or seemingly trivial, like a horse-fly bite.

Surgery can be linked with sepsis, especially emergency operations on those in poor health, or with peritonitis or bladder infections.

Know what to do.

Sepsis isn’t one disease, but rather a syndrome that cuts across almost every medical speciality. The first doctor you see could be a paediatrician, a gynaecologist, an orthopaedic surgeon, or your GP, and sepsis may not feature at the top of their list. That’s why it’s so important for you to mention it. When you see the doctor or nurse, make sure you say, “I’m worried about sepsis.”

Thanks for bearing with me.

Here’s a selection of further reading if you’re interested.

The UK Sepsis Trust is a charity founded to save lives and improve outcomes for survivors of sepsis by instigating political change, educating healthcare professionals, raising public awareness and providing support for those affected. For their general factsheet on sepsis, click here.

Three and a Half Heartbeats by Amanda Prowse. A novel of love, loss, and hope about a family devastated when their child dies of sepsis. And proceeds go to UK Sepsis Trust.

War and Peace, when it was a 1,225-page blockbuster rather than a toothsome TV adaptation, was a by-word for long and weighty.

At medical school, one lecturer seemed bent on following in Tolstoy’s footsteps. Using ten words when one would do, he habitually overran, but did he cram more in? Was his specialism more vital than others? No.

Sadly, many speakers drone on at length, oblivious of their audience and of those scheduled after them, their numerous PowerPoint slides an accessory to their crime of disrespect.

Most topics, even Brexit, could be covered more succinctly. Going too long is blatant laziness. “I didn’t have time to write a short letter, so I wrote a long one instead,” said Mark Twain. Others, including Cicero, TS Eliot, and Blaise Pascal have expressed the same sentiment.

As the cliché goes, it would be easy for journalists from The Sun newspaper to write for The Times, but not vice versa. Guido Fawkes, who has done both, agrees.

Keeping it short leaves little scope for nuance. On the plus side, readers won’t give up in droves, as if their team is losing 6-0.

You may like to read: 10 Tabloid Tips to Better Writing, from Writer’s Digest and my writing colleague Dan Holloway on Why Less is More When Reading or Performing Your Work in Public.

First of all, a shedload of money. According to one estimate, the UK spends around £1bn a year on gifts and going out on Valentine’s Day.

You could be forgiven for thinking that St Valentine is the patron saint of the gullible.  But here are a few other things this day is for.

1 A chance to show someone you’re interested, without giving too much away. Sending a valentine is like saying you love someone then putting a smiley at the end to show you didn’t really mean it 😉

But choose your message wisely, especially if you think size matters. This is what it said on the back of one such card.

2 A time for charities to remind you that few things are as loveable as a ball of fluff or a cold wet nose. And that there are other ways to spend your money than on long-stemmed red roses and other such fripperies.

Here’s a cute little video from the Mayhew Animal Home, which regular readers of this blog will have seen mentioned before.

3 A dance in the village hall plastered with red hearts, like the one I went to last night. Not just a disco, but also live music, a quiz, and endless helpings of chili con carne, all bound to warm the cockles of your heart on a cold winter’s night. The scene is replicated in village halls all over the land, where raffles and dad dancing take place. Whether it’s to raise funds for upkeep of the rec, or to support some local club, it’s the community getting together in a good cause.

Perhaps that should be the true meaning of Valentine’s Day.

Gene editing has been all over the news these past few days.

While the technique is still experimental, it holds the hope of bypassing defects that lead to life-threatening conditions.  I suspect the level of interest has a lot to do with the universal desire for a baby that’s perfect in every way.

But, with tongue now travelling towards cheek, I wonder: what’s the point of a perfect baby, if the parents happen to be deeply flawed?

In gene editing, enzymes are used as molecular scissors to snip out certain sequences of DNA and replace them. If I were making a template for a designer parent, here’s what I’d cut out:

Should be excised from a parent’s repertoire. It’s not even OK to give the little terror a taste of his own medicine. If he kicks you and you kick back, you’re only saying that aggression is acceptable.

Oh, all right. So Go the Fuck to Sleep was hilarious, momentarily. On the other hand, I’ll never forget the woman who brought her three-year old to speech and language therapy because he knew so few words. But he was fluent at saying, ‘Bugger off’.

I’m guessing you too have felt the urge to yank your toddler’s arm out of its socket when he dawdles. Unfortunately, kids learn by example. How do you want to be treated when you’re in your dotage? Enough said.

Yep, even when it’s slick and sarcastic and makes you feel bloody clever, a critical drip-drip-drip of erodes a child’s self-esteem.  Check out Dorothy Lawe Nolte’s poem Children Learn What They Live.

Only a better-than-average saint could put someone else’s needs first all the time, but that’s roughly what parents have to do. Obviously, it would help if gene editing could also do away with the need for sleep, privacy, quiet, and going to work.

Here I’m thinking of overindulging the child, which is almost as bad as neglect. Growing up without rules or limits doesn’t make for a happy person who knows his place in the world. But, while they’re at it, some parents could also cut down on drink and drugs.

So those are my thoughts on being a designer parent. Sorry if I failed to mention Gucci, Prada, and Tom Ford until the end. 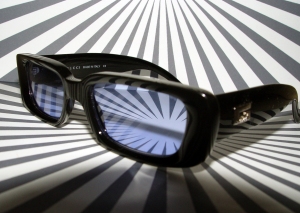 Are you a parent, or perhaps a keen observer of family life? What do you think?