On a sunny summer day, the grounds of Burghley House proved a good place to ponder this question. The occasion was the annual rally of the Rolls Royce Enthusiasts’ Club on the 100th anniversary of the marque, no less. Some of the visitors seemed of similar vintage. But, if the setting of England’s greatest Elizabethan House didn’t evoke lust, the Flying Lady (aka the Spirit of Ecstasy) probably would. 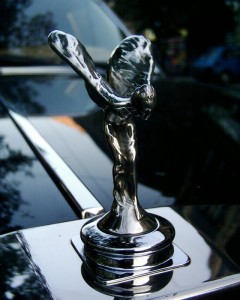 Arriving in my neighbour’s Arnage, I thought we fitted in rather well. OH and I posed in front of cars like this classic green Bentley. 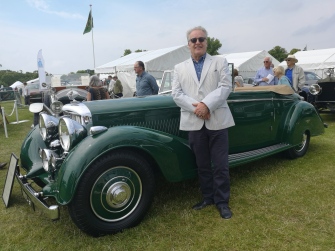 If you’re wondering about the definitions of classic, vintage, and veteran, here’s one widely accepted version. Classic is over 20 years old, while vintage is 1919-1930, and veteran is pre-1919. 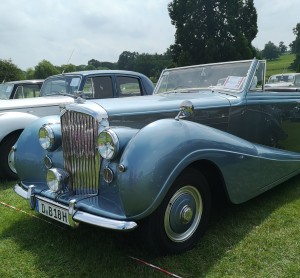 Some of the motors we saw were for sale, but most were for show, closely guarded by their owners as if their charges were entrants in a teen beauty pageant.

Some, like this Corniche, were watched over by dogs.

The atmosphere seemed designed to prompt extravagance. Sunshine, free fizz, and John Timms’ Jazz Band make such an intoxicating mix that a 1962 Silver Cloud begins to look a steal at just £395,000.

I had my eye on a sky blue Bentley, but doubt I could have afforded its dinky little brother. 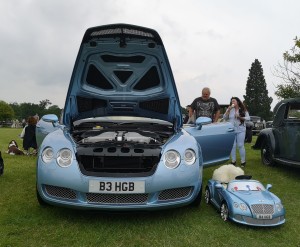 Exploring stalls with items for sale, we admired shiny cylinder heads, members’ spares, and picnic sets for a mere £3,000.  I turned away from a perfectly lovely Louis Vuitton suitcase. It was £2,800 and it didn’t even have wheels!

Perhaps the less car-related merchandise would be within my budget. I tried on a splendid coat by Gabriela Rose Ltd. The mirror told me it fitted perfectly. The label told me it was £995.

In the Gallery Marquee, I enjoyed an affordable piece of fudge before wandering off again among the rows of cars. We traipsed as elegantly as one can in a field. Turned out to be easier without shoes. Who knew?

Owners were only too happy to tell everyone about their pride and joy. As it happens, I know something of their fervour. I did own a classic 1973 Beetle for over 25 years. It might not have swanned about stately homes, but Sauerkraut and I clocked up plenty of miles on camping trips to France and Spain.  And Wales. Mustn’t forget Wales. The speedometer gave up the ghost on the way back. 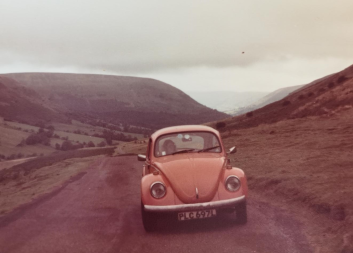 Lacking even the most basic cocktail cabinet, Sauerkraut was a tad low-tech by Rolls Royce/Bentley standards. Did it have air con? Only if you opened the quarter-lights as far as they would go and kept up a steady speed of 70mph. As for heating, what’s wrong with a coat and gloves? My very first Beetle didn’t even have a fuel gauge. Instead there was a lever for deploying a reserve tank when you were out of petrol.

Was my classic car a sex symbol? It was probably more of a fertility symbol, especially with three child seats across the back, a double buggy shoved haphazardly into the front, and a random assortment of toys meant to keep little boys quiet on long journeys.

You won’t find my beloved Beetle standing in front of Burghley House, but it has graced some of the finest NHS hospitals in the land. Here it is at the Canadian Red Cross Memorial Hospital, in Taplow, Berks. 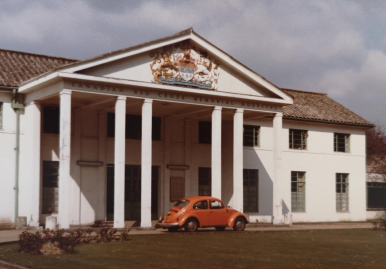 When I went into general practice, Sauerkraut and I got to know every single street in Borehamwood. I recall one particular patient who called for a visit for back pain. When I examined him, I told him his back didn’t seem too bad. “I know,” he replied. “But I want to buy your car.”

Many years later, I sold Sauerkraut to a lovely family from Liverpool who renamed it Carol.