Today’s tests are no biggie. Nothing like the ones Sanjay’s had in the past. Anyway, he’s feeling better than in a long time.

There’s already a queue of blood test patients waiting to be interrogated at reception. You only get a numbered ticket once the bossy boots at the desk finds out if you’re fasting.

Sanjay gets number 79. The display on the wall says 46. No wonder the place is packed. Pretty soon he’s finished reading the Metro. So he reads people.

The girl next to Sanjay isn’t fasting. She’s shedding sugar from her donut all down her ample front. Fact: nobody who eats donuts ever looks as if they need to eat. And right under the sign that says no eating, drinking or assaulting NHS staff, a man is chomping into a burger. A ketchup sachet lies at his feet.

The plastic chairs are hard. Sanjay wishes he weren’t so skinny. There’s also a bench for urgent patients. The urgent patients look terrible, as if expecting to snuff it while waiting. He was on that bench not long ago, but now he’s been promoted from living dead to living living.

It’s number 67 now. The snoozing woman in the seat next to Sanjay wakes with a start when her walking-stick falls over. Walking-sticks always do. You’d think someone would design a solution.

Some people have brought their entire family, along with their shopping, scattered in carrier bags in and around the chair legs. A toddler with a cold studies Sanjay then removes his finger from his nose and wipes it experimentally on the arm of the chair.

The phlebotomist who finally calls Sanjay isn’t just a phlebotomist. The badge says he’s a cannula technician too. He is about 5’3” and one of his spots is threatening to erupt. He only opens his mouth to ask Sanjay to confirm his name and date of birth. Blood is taken wordlessly. It’s important to make patients feel at ease in today’s patient-centred NHS. 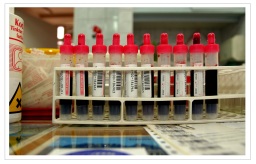 Out Sanjay goes, clutching a cotton wool ball to the crook of his elbow.

The imaging department is at the other end of the hospital, down a draughty corridor guaranteed to give you double pneumonia if you don’t have it already.

Nobody’s eating in x-ray. They’re too busy figuring out how to sign in. For chest x-rays it’s straightforward because you can go anytime Tuesday to Friday from 9 to 11am and from 3 till 5pm. He doesn’t like to ask what the hell they do 11-3, not to mention all day Monday.

If you have an appointment, a state-of-the-art machine scans your letter. If you don’t have an appointment, you go to the desk. There’s a third machine that dispenses numbered tickets.   A young man in a moon-boot is waiting patiently while someone tries to fix that one.

Sanjay hangs around the desk while a receptionist makes a hash of explaining a test to the patient in front of him.

Finally Sanjay is told “Take a seat and you’ll be called by your name.” He thanks his lucky stars he’s called Shah, not something like Sivaramalingham. He sits by a wall decorated with enticements to give blood, volunteer for the League of Friends’ shop, give up smoking for good, get help with your alcohol problem, report domestic violence, and donate your organs as soon as you finish with them.

There’s a lot more activity here than in blood-testing. For one thing, there are two calling systems. The staff have the knack of calling out a patient’s name at the exact same time that the automated system calls out numbers. Means nobody can hear either announcement, so patients keep getting up to ask what’s going on, then coming back to their seats, head shaking in disappointment.

One patient has got the system figured out. Now she’s giving out to all and sundry the phone number of the professor’s PA, which is, she reckons, the only way to get your x-ray done and have the results sent to your doctor in the same century.

Only the old man next to Sanjay is immobile. He’s wrapped in so many layers of woolly clothes that he has to sit bolt upright. Probably been wearing them a while, judging from the smell.

Sanjay needs the toilet but it’s out of order. This means a trek halfway round the hospital to find one that works. He could have just asked at the desk for a dozen specimen containers and filled those. 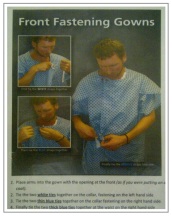 Finally it’s his turn for x-ray.

He is shown into a cubicle and handed a gown. Then he studies the grainy instructions on the wall.

Sanjay tries to tie it as per the picture, but fails. Ah. Two of the tapes are missing.   He goes into his x-ray bare-chested like Putin.

Two hours for two simple tests. Finally Sanjay breathes a sigh of relief and exits to the fresh air, rushing straight into a crowd of smokers by the revolving doors.

Next week it’s the London Book Fair. I look forward to meeting friends old and new, and reading an excerpt from my novel to fellow indie authors. I have yet to choose the passage, but you can bet Sanjay will be in it.