The thing with going to IKEA is that it invariably takes three hours, which still isn’t enough to shop and to scoff a bargain plate of meatballs or fish and chips in the café.

IKEA Wednesbury was no different. The shop has everything, mostly things my son and I didn’t know we needed yet soon realised we couldn’t live without.

The PS 2014 light is a case in point. By pulling its strings, you can make it open and shut, just like a transformer. Although, unlike a transformer, it is still a lampshade whatever you do. Bargain at £60 and would look great in my son’s new home. Now, what were we here for?

I get distracted by a couple arguing about the configuration of wardrobes and whether they really need a sofa bed (and which set of in-laws they can stand having as guests). Meanwhile, their kids have a pillow fight.

The cognoscenti may take crafty shortcuts through the store, but my son and I prefer not to miss anything, and the trolley soon filled up.

I’d brought my IKEA Family Card, which is why I got an email a week or so later asking for feedback on TYSNES, VILDKAPRIFOL, FLITIGHET, and TOKIG.

I’m not sure where IKEA get their product names, but then I don’t know a word of Swedish except Volvo and that’s Latin. Turns out they use many Scandinavian languages and place names in naming their wares, as this post explains.

TYSNES is a village in Norway. It’s also perfect for the bathroom windowsill, especially at just £19. As for the VILDKAPRIFOL, sorry, but, despite the attractive blue pattern, they’re still in the carrier bag.

The FLITIGHET are great, but then what could go wrong with plain white side plates? Alas, I can’t comment on the TOKIG. I’d wanted a salad spinner for ages, but had forgotten that I’d taken the train, so the thing had to stay at my son’s in Birmingham instead of coming home with me.

The thing is, you can forget a lot after 90 minutes in IKEA, and common sense goes out the window. Perhaps that’s why, when nearly leaving the store, it’s almost impossible to ignore the Bargain Corner. The trolley is never quite laden enough to resist the charms of knock-down prices for knocked-about products, like a coat rack with a couple of hooks missing.

IKEA neglected to ask for my views of the humble RӦRT, a fine wooden spoon with endless possibilities. Have you never made spoon dolls? Admittedly my children have long grown out of such rainy day activities, but all you need for this wholesome fun is a Sharpie (or, better, a Magic Marker with a scent that takes me right back to the sixties), and then some fabric for a dress. Why, I could even use one of those pretty VILDKAPRIFOL tea towels.

IKEA also forgot to solicit my opinion of the BӒSTIS. I deem it 75p well spent as it prevents everything I own from turning ginger. It’s well named, too, as Bast was the Ancient Egyptian goddess of cats and her cult centre was Bubastis.

MISHMISH. Not available from IKEA

Far and away my best buy was, on that occasion as on most others, only 50p. Aptly named, the FRAKTA is generally purchased by the checkout when everyone is a bit fractious, even they’ve managed not to drop a BILLY bookcase on their foot. 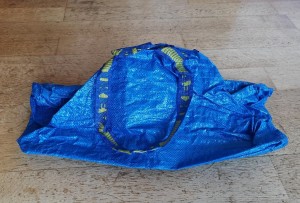 The FRAKTA after deployment

It may not look much, but it is a workhorse. As the catalogue has it, “Be it shopping, doing laundry or going to the beach, it goes wherever you go.”

Except it doesn’t. I always leave mine at home and having to buy another carrier bag at the store.

We caught up at the checkout with the quarrelling couple and the bouncy children, by then pacified by the promise of ice cream. Shopping at IKEA can be stressful, but it doesn’t detract from the chain’s iconic status.

Do you have a great IKEA story? Perhaps you even know someone who met their partner there, as opposed to just arguing with the one they went shopping with. I’d love to hear from you.

You may also enjoy this post on Feedback Frenzy.