Honeymoon Mark II got off to a promising start.  For one thing, my mother didn’t come along this time.

The years since my first marriage had rolled forward like breakers on the shore, too many to count, so there were other changes too.  I learnt a lot in just one sunny week in the Med.

1.   It’s a good plan to tell the hotel it’s your viaggio di nozze, not least for the complimentary fruit and fizz in the room, plus free entry to the spa.

2. Italian is a language that comes back easily, even if you never studied it before.  New Husband went native.  By day two, he could say ‘Bon Jovi’ and pinch my bottom at the same time.

3.  Russian is a must if you want to chat to fellow hotel guests.  It had been a few years since I’d stayed in a resort hotel.  Nobody told me the oligarchs had bought Italy.

4.  Champagne can be sold out even when it costs 5,000 Euro a bottle. Yep, conspicuous consumption is the name of the game, and they don’t just drink vodka.

5.   Someone’s changed the print on every single map, menu and guide book.  We should have brought a magnifying glass.  It would also have been useful after a rash encounter with a prickly pear, especially if we’d packed tweezers as well. 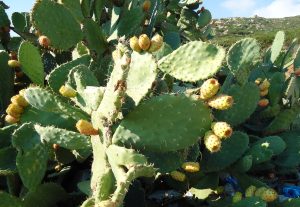 6.  It was low season for humans, though not for insects.  Without repellent, female mosquitoes zoomed in on New Husband’s legs and feasted on a lavish buffet.*  More gorged themselves next day.  Had the mozzies given him a rave review on TripAdvisor?

7.    It’s not such a good idea to hot-brush your hair when your other half is feeling romantic.  Your hair wand could singe his, er, wand. 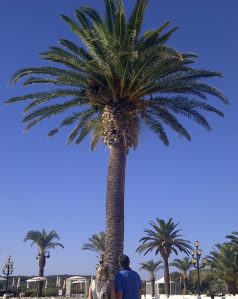 Although my mother wasn’t with us, we managed to entertain ourselves.  Every morning, a date palm burst into activity as parakeets squabbled until they evicted one or more.  But you know what large families and overcrowded flats are like.  The respite was temporary.

People-watching came into its own at dinner.  When not admiring Russian molls in their pink patent platform heels and the worst of Cartier’s excesses, we were amused by Monsieur Langouste.  Moustachioed, combed-over, and looking for all the world like a TinTin character in his black vest, he began every meal with five lobsters, which he’d repeat for the main course.

Most people took advantage of the extensive menu, piling their plates high with rack of lamb, aubergine parmigiana, sea-bass, Brussels sprouts, tuna carpaccio, pizza, plus a side salad.

Oh, wait. That was us.  Which may explain the souvenir we brought home.  Excess baggage.

* Link to Are You a Mosquito Magnet?  http://www.webmd.com/allergies/features/are-you-mosquito-magnet

I’d love to hear from you.