New Yorkers think of New Jersey as their outside toilet, especially if, like the Daily Show’s Jon Stewart, they came from there originally.

Actually, New Jersey is my favourite state, but it takes a bit of getting used to. How did my thoroughly English husband manage his week-long venture into the unknown? 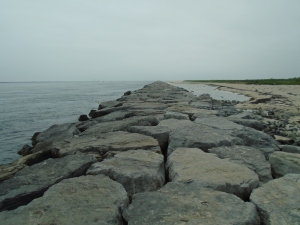 He couldn’t get what the natives were saying. We had just passed through the toll on the turnpike where I was relieved of about three bucks. “What’s that she said?” he wanted to know.

“She asked me how I was today, and whether we were from England.”

He rested his head back and closed his eyes. It was too puzzling. A little lady who sits sweating all day in a tiny metal booth gives enough of a shit to ask you how you are and whether you’re from England?

“Welcome to New Jersey,” I said.

We’d packed way too much stuff.  All we needed for the week was Bermuda shorts and flip flops. And swimsuits, obviously, because between the beach and the pool, we practically lived in them.

One afternoon, two guys were splashing about in the motel pool, alternately hugging and trying to drown each other. I was worried. “He trying to kill you?” I called out.

He surfaced to reply, “Nah. He ain’t gonna hurt me. We’re brothers.”

If you’ve ever heard of Cain and Abel, that’s no consolation.

My husband remarked later, “They didn’t look much like brothers.”

“Perhaps one of them’s adopted,” I suggested.

Just when you think you’ve got the hang of the language, someone breaks into Spanish.

Yep, Spanish is an American language too. However, a sign saying PISO MOJADO is neither an instruction to empty your bladder, nor an explanation of how the floor got wet.

It’s obligatory to visit the legend that is Conte’s Pizza. 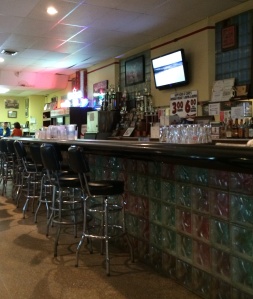 It has the longest bar in Princeton and ranks as one of the top 33 pizzerias in the nation.  I always have everything on my pizza. Saves a lot of hassle trying to decide.

Also I stop by the drug store on the way there. Saves a lot of hassle later. 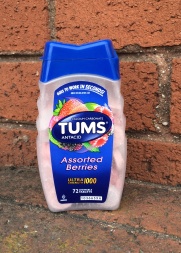 Jet lag gets worse with age. Even the modest time difference of five hours left us dazed, drowsy, disorientated, and puffy from fluid retention.

Luckily you can buy melatonin pills at CVS or Rite-Aid at the same time as Tums. Do they work? I have no idea. Some people swear that drinking urine is just as good. Tell you the truth, I had no idea we were that confused.

You may see flashing lights in front of your eyes.

I swear they weren’t there in Norfolk. That’s because they’re fireflies.

You need a permit like this to go onto the beach. 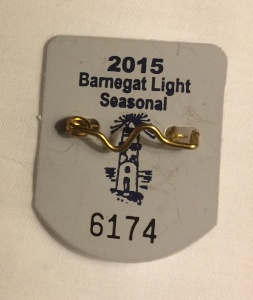 And then you have to show it when asked.

The same goes for your driver’s license. None of this English namby-pamby seven days to produce your documents. Which makes it just like the beach badge, only you can’t get out of trouble by paying five dollars to the Highway Patrolman.

NJ is a highly dangerous place.

We took our lives into our hands and set out for a walk by the Delaware and Raritan canal, though not its whole length as I couldn’t manage 70 miles. We certainly needed the big stick my husband had brought along to protect us. There were nettles galore, even the odd dandelion. Couple of people cycled past and said Hi. A bit further on, a family of turtles sunned themselves on a log. It was bloody terrifying. 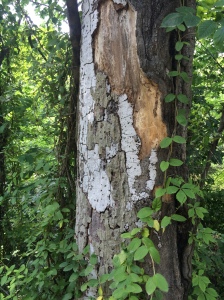 Restaurants are family joints. Although it’s probably best not to ask on arrival, as my son once did, “Is this the restaurant owned by the Mafia?”

Here’s what we found parked outside one of them. We had to wait for our table, so we hung around watching people leave. 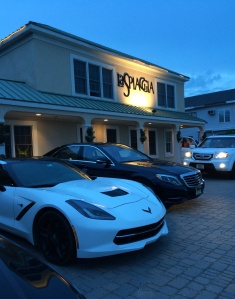 The trashy trophies on the sugar daddies’ arms. The Mercs and the Stingrays. The guy putting the hood up on his convertible before driving off, so the wind doesn’t blow his toupee off. The scene could have come straight out of The Sopranos.

Yep, all the stereotypes about NJ are true, and then some. But I would say that. You won’t hear a thing from me about the art, culture, or history because I don’t want the world discovering how good it is.