Whether you’re about to start your studies at Cambridge or just want to know a bit about this ancient university, here’s the low-down in 7 easy steps.

View of Clare from King’s Bridge

1 Cambridge is a collegiate university and, no, the 31 colleges are not all the same. The oldest is Peterhouse, founded in 1284, while Robinson only dates from 1977.

There are postgrad-only colleges (Clare Hall and Darwin), four colleges specifically for mature students, and two only for women (Newnham and Murray Edwards). 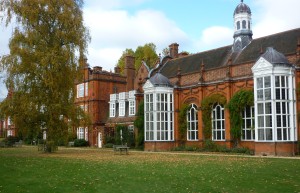 Mixed colleges are a fairly recent introduction. Until 1972, the vast majority of colleges were all male. With a sex ratio of 10 to one, it was much harder for a woman to get a place. If she wanted male company once she got into Cambridge, however, all she had to do was show up and breathe.

Each college has a bespoke woollen scarf in college colours. Whichever college you attend, the scarf is very scratchy.

2 There are no mountains between Cambridge and the Urals, so winters can be chilly. Thanks to the easterly winds, most students sport a cold wet nose by November. It’s said to be a sign of good health in animals, though not in undergraduates.

3 Geography is generally ignored. Most people still call Cambridge a town though it’s actually a city. Although it is very flat, one still goes UP to Cambridge and DOWN to London. Nobody ever mentions Oxford, or they simply call it ‘the other place.’ Should you be forced to write it down, it’s traditional to use a lower case O for its name. This petty snobbishness is totally misplaced because Cambridge University was founded by scholars who fled Oxford. 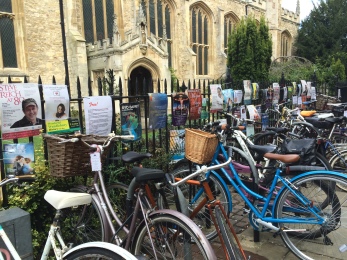 4 The Cambridge Union is not a union. It’s a debating society. There was no students’ union at all until 1971, and even then it had no premises for its members, just a tiny office for those who ran it. It was in Round Church St, an address many dossers knew well as they turned up regularly for handouts.

5 You’re here to learn? Oh, right. Well, in that case you need to know that the Faculty or Department arranges your lectures, seminars, and lab work. Your college arranges small group sessions called supervisions which take place in the college, or in university buildings. And accommodation is almost always within college. 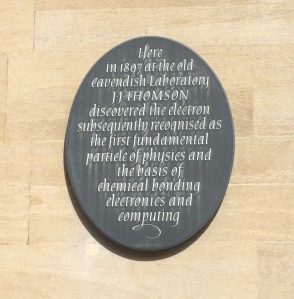 Where the atom was split

Each broad subject area is called a Tripos, eg Economics Tripos, Natural Sciences Tripos (which includes subjects from Physics to Cell Biology). These are divided into parts and students complete a number of parts in one or more Triposes to qualify for the BA degree. Yes, the basic degree is BA Hons whether you’re reading sciences or arts. Hold on to it for another few years, and it upgrades to an MA without any further study.

The word Tripos is so popular that end of year exams are also called Tripos. The name comes from the three-legged stool exam candidates used to sit on.

6 From April to about October, cattle graze on picture-perfect common land within the City of Cambridge. It’s all very well wandering about with your nose in the air and your mind on higher things, but watch where you put your feet. Best look behind you now and again too, in case you’re being followed.

This cow wandered into a stream to cool off and she’s now munching watercress while a man serenades her with his violin.

7 Pets aren’t generally welcome in College, though, especially not dogs. When Lord Byron was forbidden to keep a dog, he got himself a bear for his room in Trinity. More recently, the Master of Selwyn was only allowed his basset hound when the College Council ruled that Yoyo was, in fact, a very large cat. I don’t know what they thought of its ears.