The new garden, about the size of a postage stamp, looked forlorn. This time of year, everyone else’s garden is already a riot of colour. Our soil is so poor, this is about all we can grow. 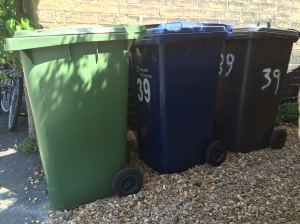 But then two students gave me an idea. As they walked past the English faculty, I heard one of them moan about having to ‘dump his shit before Michaelmas.’

The other one nodded encouragingly, and agreed he would dump all his shit too, man.

I know what Michaelmas is. It’s the name of the academic term that starts in early October and ends before Christmas. I wasn’t so sure what kind of shit they meant, but it got me thinking.

But have you any idea how hard it is to find when you actually want some? There’s never any shortage of bullshit. The equine variety is another matter.

When I was at medical school, any really rare condition would be described as ‘rocking-horse manure. I never appreciated that the real thing could be equally challenging to track down.

Somewhere in Norfolk I’d spotted a sign that said HOSS SHIT, but Norfolk is a long way from anywhere. Except maybe Suffolk.

Lo and behold, this sign was a lot nearer home, and had more conventional spelling. 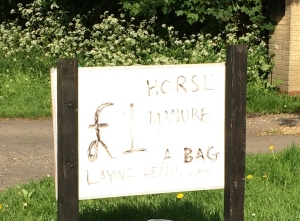 We stopped the car. Bingo, I thought. There was even a visible guarantee of quality.

We knocked on doors, rang on bells, and went round the back of the outbuildings. Nobody was in.

So at the weekend we visited Wimpole Hall, a National Trust estate with a mansion and a working farm.  There was cow shit galore, a lot of it still on the actual cows.  There was also an amorous bull in a pen with several cows, which prompted a toddler to ask, ‘What are they doing, Mummy?’

‘Good question,’ said the mother as she wheeled the buggy away.

Sheep shit and pig shit too, but surprisingly little horse shit, certainly none for sale in the twee gift shop, complete with gingham ribbon like everything else. I think the National Trust missed a trick there.

There are substitutes, obviously. Some say cow shit is as good if not better. Would cat poo fit the bill? We have our own little factory, supplemented by presents from guests who come over the wall at night. 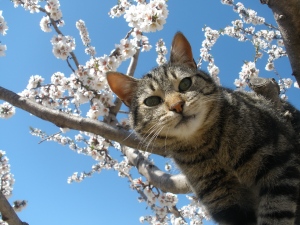 If you’re wondering, the human stuff won’t do. Although my mother, ever the eccentric, used to tell me to put dirty nappies on the compost heap. Don’t worry. I wasn’t a very obedient daughter.

If you think you can collect horse manure fresh, think again. For garden use, horse manure needs to be well-rotted. That’s why I haven’t been round the riding schools and livery stables with an extra-large dog-poop bag.

You can get anything on eBay, right?  I checked this out. You can get horse manure for about £1 a bag. The snag is that you have to collect it from Scotland.

The solution was surprisingly simple.  I should have thought about it sooner.  Yep, the garden centre. Go ahead. 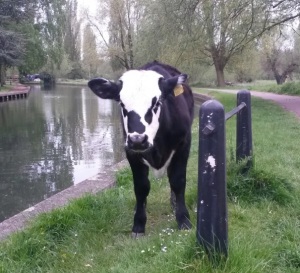 Call me a silly little cow.