“Gin and tonic?” says John. He points at the clock. “It’s almost six.”

When Janet and John get to the supermarket, they find a long queue all round the car park. “Have you seen all these people?” says Janet, fiddling with her mobile.

“I know. This is going to be so boring,” says John.

“You’re telling me. They’re the least Instagrammable people ever.”

“I’m worried about how close some of them are standing,” says John. “That’s much less than two metres apart. More like nine inches, if you ask me.”

When they get to the entrance, John says, “Where’s the shopping list?”

Janet frowns at him. “You don’t get this lockdown, do you, John? We just buy lots of anything that looks like it’s running low in the shop.”

“Or gin,” says John, grabbing two bottles off the shelf.

An hour later, Janet and John are in aisle seven. John is confused about the contents of their trolley. “But you don’t need TENA pads, Janet.”

“I will do by the time we reach the checkout, John.”

They are about to leave the supermarket when Janet shrieks. “Look, John! The food bank donation box has gone!”

“Don’t worry, Janet. I expect we can donate money online.”

“That’s not the point. I was hoping to pick up tinned tomatoes because there aren’t any left on the shelves.”

After they get home, Janet and John wash their hands for 20 seconds and have a nap for two hours.

Janet wakes up with an idea. “Do you fancy a game of Scrabble, John?” 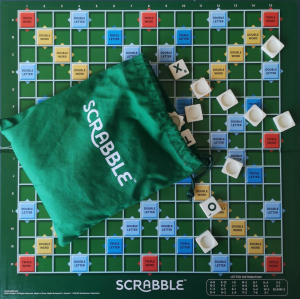 John agrees on one condition. “Only if you promise not to store all the blank tiles and Ss down your bra.”

“But John, stockpiling is what pandemics are all about. If you won’t play properly, then we shall have to sit on our sagging sofa and watch another episode of Poirot instead.”

After three episodes of Poirot, Janet and John are sitting much closer together on their sagging sofa.

“I say, Janet,” says John as he strokes Janet’s rounded belly. “I don’t know how many weeks gone you are, but I’m so looking forward to our baby.”

With the cancellation of major events such as the London Marathon due to coronavirus, many charities are on the brink of collapse, while at the same time facing increased need for their help. Please give generously where and when you can. If you want to help a hungry family, consider the Trussell Trust which supports a nationwide network of food banks.

First of all, a shedload of money. According to one estimate, the UK spends around £1bn a year on gifts and going out on Valentine’s Day.

You could be forgiven for thinking that St Valentine is the patron saint of the gullible.  But here are a few other things this day is for.

1 A chance to show someone you’re interested, without giving too much away. Sending a valentine is like saying you love someone then putting a smiley at the end to show you didn’t really mean it 😉

But choose your message wisely, especially if you think size matters. This is what it said on the back of one such card.

2 A time for charities to remind you that few things are as loveable as a ball of fluff or a cold wet nose. And that there are other ways to spend your money than on long-stemmed red roses and other such fripperies.

Here’s a cute little video from the Mayhew Animal Home, which regular readers of this blog will have seen mentioned before.

3 A dance in the village hall plastered with red hearts, like the one I went to last night. Not just a disco, but also live music, a quiz, and endless helpings of chili con carne, all bound to warm the cockles of your heart on a cold winter’s night. The scene is replicated in village halls all over the land, where raffles and dad dancing take place. Whether it’s to raise funds for upkeep of the rec, or to support some local club, it’s the community getting together in a good cause. 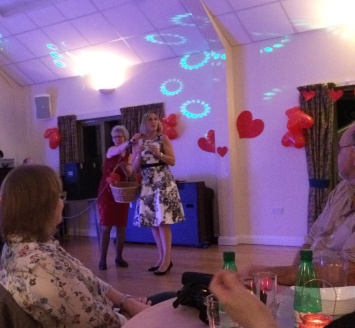 Perhaps that should be the true meaning of Valentine’s Day.

You don’t need telling that it’s a busy and stressful time of year, especially if you have family to look after.

No wonder so many of us will be rushed off our feet. Or indeed our paws.

I’m thinking of dogs like the lovely May here whose duties include opening and shutting doors, unloading the washing machine, picking up dropped items, pressing buttons and switches, and if need be getting help in an emergency.

There’s the Christmas shopping to attend to, and that requires money. Here’s May using the ATM. 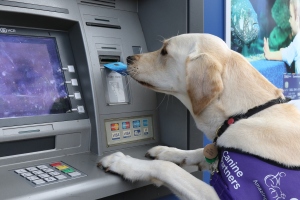 All the food to buy.

Canine Partners like May are trained to do a range of different tasks, but they’re intelligent and can adapt to the person’s lifestyle. In a survey, over a third of their humans say they rely on them to tidy toys away. Some dogs even let the cat in and out. And in and out again. 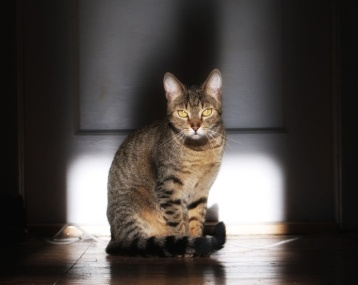 And they do all this without a murmur of complaint, which can’t be said of most humans.

I don’t know about you, but I think May deserves something in her Christmas stocking.

If you don’t need an assistance dog yourself, you can still adopt one. Might even make a good last minute Christmas present for someone.

Have a merry Christmas, one and all.

Canine Partners assists people with a range of disabilities to enjoy a greater independence and quality of life through the provision of specially trained dogs.

For example, the charity works in partnership with Help for Heroes, aiming to train dogs to meet the needs of people with even the most complex disabilities.  These life-transforming dogs also provide practical, physiological, psychological and social benefits including increased independence and confidence as well as increased motivation and self-esteem.

Canine Partners is a registered charity and receives no government funding. It depends wholly on public donations and legacies.

That’ll be you and me.