One of the great things about moving into your very own home is the potential for making it exactly as you’d like it to be.

My first property, a small Victorian house in Harrow, North London, suffered from damp and neglect. The fireplaces and kitchen were vintage 1950s, and so was everything else. The first job was to treat the rising damp, then do some rendering and plastering.

I had not long qualified as a doctor when I bought the house. My pockets were empty, but I was full of optimism. Flushed with success at two recent cardiac arrests, where, against all odds, both patients lived to tell the tale, I decided to have a go at home restoration.

Armed with a couple of trowels, a large bag of Marley Mix, and a smaller one of plaster, I got stuck in. It didn’t take long to realise that (a) this was very thirsty work (b) it required considerable expertise. As the rendering kept falling off the wall, and my plastering looked like a relief map of the Himalayas, it was clear I didn’t have those skills.

Suffice to say that a large sofa can conceal a multitude of mishaps.

Number One son has now bought his first home. While his learning curve hasn’t been as steep as mine was, there have been important rites of passage, like buying his very own drill.

And then putting up the very first towel rail or mirror. I believe I’m the ideal person to teach this, as I’ve put up lots of towel rails (oh, all right – just the one towel rail, but lots of times). 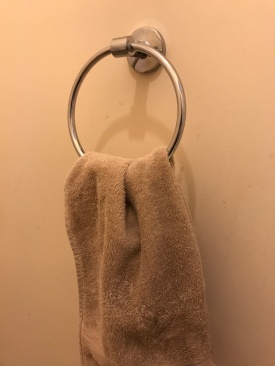 Unfortunately, my son had lent his hammer to a friend, but a meat tenderiser does much the same job and can also leave a pretty pattern on the wall.

The man in the shop had warned that, once you get your own combi drill, you use it all the time. And so it proved. Why not drill an extra hole under the sink, just in case? That eye protection looks pretty cool too. 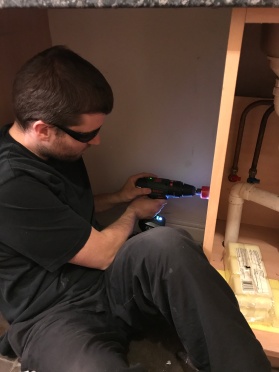 It’s great getting to know your new neighbours, but sometimes that happens more quickly than intended. Curtains became a priority.

Carpeting may come soon because, basically, how long can one live with other people’s stains?

Here the trouble may be too much choice. Exactly which shade of grey/beige/greige to pick? Even more confusing when the products have similar names.

And then which underlay – crumbed or sponge rubber?

It’s all a bit too much. I think this calls for a nice cup of a tea and a biscuit before someone picks up the drill again.