I doubt I’ll ever buy another thing. The price of accumulating stuff is a periodic clear-out, and if that means another car boot sale, the aversion therapy has worked. 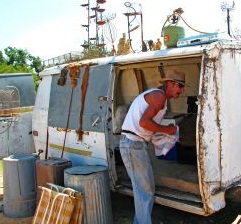 Car boot sales mean getting up ridiculously early.  At 6.45am the venue was already buzzing. We’d barely opened the tailgate when people started poking around, helpfully extracting our stuff from boxes and baskets.  They drifted off when they realised we had no vinyls, military badges or priceless artwork going for a song.

We did have clothes, books and general bric-a-brac.  One man spent ages doing and undoing every zip on a rucksack.  He returned half an hour later to do it all again before buying it.

Some had a specific mission: football club badges, trousers for work, king-sized bed-linen.  For others it was a day out.  One young woman sipped from a trendy Mason jar drinker as she strolled around.  I looked for the cameraman, sure that she was on a shoot.

When we weren’t helping folks try on suits (‘It’s a 42” chest’ I reminded the XXL man who was trying to pour himself into a pinstripe jacket), there was always people-watching.  Ankle socks and high heels were the favoured footwear for women.   One woman walked around with Chihuahuas stuffed down her front.  Her puppies?  I’ve no idea.

There were lots of kids, not always supervised.  A toddler bashed a wooden train to pieces on the concrete. His parents ignored him in favour of bargaining over a laundry bag.  Many people had brought their dogs.  A spaniel cocked his leg against a tyre.  A man with two boxers asked about a picture-frame.  When I said it was 50p (about 75 US cents), the man said he’d go away and think about it.

Some people can’t resist the lure of towels they don’t need and books they don’t want. One woman picked up every book on our table, from Angels and Demons to Weaning Your Baby, then shrugged and told me she didn’t read.

The weather turned windy and cool, but I could take my pick of warm clothes off our cheapo clothes rail.  By now the rail had toppled over several times.  Here it is lashed to the car with a printer cable.

Nobody bought the printer anyway.  Seems there’s not much call for elderly printers with empty cartridges. Who’d have thought?

We had to keep our eyes open or things could go walkies, but there were sales to make.  At £8-£10 each (about $13-$16), the suits went fast. ‘Looks great on you’ said my husband as another punter tried on a jacket, checking his reflection in a car window.

For those of you who’ve never done a car boot sale, you can buy or sell almost anything there: bikes, baby clothes, furniture, you name it.  It’s a bit like a flea market, minus the fleas.

Though, come to think of it, I’ve been itching quite a bit since.