Sanjay is only in his 30s but he’s had a lot of surgery, all of it since the cancer was diagnosed. That’s if you don’t count ingrowing toenails as a teenager, now best forgotten along with his pongy trainers.

As with Laura, Geoff and the other people in my novel, I made Sanjay up.  He only lives, breathes and sheds tears in my fiction.

In his opinion, the only good thing about operations is the pre-med.  That injection is chock-full of morphine.   Makes you as legless as a freshers’ night out.  There’s also some stuff to dry up secretions, so your mouth is like an African drought.  But with the morphine on board, who gives a fuck?

Then the anaesthetist gets him to make a fist.  “Now count to 10 for me.”   He never gets beyond four before drifting away. 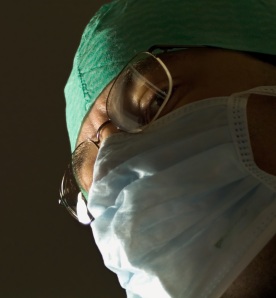 Whatever delicious thoughts he has on going to sleep, there’s always hell to pay when he wakes up.  Last time, someone was moaning like a wounded animal in the recovery room.

And Sanjay was in serious pain.  Just because you were asleep when they plunged a knife into your neck didn’t stop it hurting like hell afterwards.

He thought of his mate Ben.  He must have been in agony for hours.  Sanjay wondered if anyone had given him enough morphine, whatever ‘enough’ means when an IED has ripped off one of your arms and a hunk of leg.  Was there was someone sitting by him, like this nurse here?  Probably not.  Just another wounded soldier, doing his best with a tourniquet and praying the MERT would show before they both snuffed it.

In the recovery room, Sanjay had the irresistible urge to sit up, but the pain and the nurse kept forcing him back down.  He had a sore throat and felt sick.  The smell of antiseptic didn’t help, nor did the bilious scent of dressings.  Nurses insisted there was no smell, but they were wrong.  Since the chemo, he could smell everything.

The moaning still hadn’t stopped.  Some poor deranged sod really didn’t want to be here.  “Hush now” the nurse said. “I’ll get you a sip of water.”

The thirst was unbearable, but all he got was a plastic thimble of water, with instructions to take a small sip.  Most of it went down the front of his hospital gown.  Miraculously, the moaning stopped when he drank the water, which was when Sanjay realized that he was the deranged sod making all the noise.

He patted his neck and shoulder tentatively through the dressing.  Strange that such a small procedure would lead to so much trouble.  Maybe it was the drugs.  It was always a bad idea to mix drugs, but hospitals dosed you with reckless abandon, with gases out of metal cylinders, and loads more stuff into your veins.  One of the anaesthetists explained it.  She was one of the new docs, a woman with long red hair and a piercing that went right through a massive freckle on the side of her nose.

She was flirting with him, he was sure.  So he flirted back, as best one could when lying down and wearing a hospital gown instead of Paul Smith loafers, Armani jeans and lucky pants.  That was when he learned about the IV anaesthetic drugs, like fentanyl and ketamine.  All the stuff to make sure you didn’t come to during the op. No wonder by the time he got to the recovery room he felt he’d gone four rounds with David Haye and had an overdose of Ivory Wave or whatever high you could get for a tenner these days.

He’s hoping he won’t go under the knife again, but the cancer always seems to have other ideas.