When I first blogged about the eight mistakes of newbie writers, I knew I couldn’t cover the whole subject in a few hundred words. Since then, fellow author Keith Dixon and other colleagues have pointed out several more pitfalls that would-be novelists really should avoid. That made it high time for this follow-up.

1 Beginning before the beginning

Many novice writers launch their story with a wordy description of the main character, or a biography beginning with that person’s existence long before the action in the book – sometimes even back to their birth.  The danger is that, unless you’re Dostoevsky, readers will ditch your prose in favour of a novel where something is actually happening.

You might think ‘he said’ and ‘she said’ are too dull to bear repetition, but the truth is that these basic dialogue tags tend to melt into the background, and readers barely notice them. On the other hand, they’ll certainly notice (and not in a good way) a regurgitated thesaurus such as this.

“Not first thing,” he protested.

“And what’s wrong with an early start?” she remonstrated.

“Not as lazy as you,” he muttered.

“I bloody heard that!” she expostulated.

3 Using too many adverbs

How many is too many? It’s a matter of opinion, but I’d say most adverbs are unnecessary, as here.

If you find you use a lot of adverbs, work on livelier and more concise ways to convey what you mean.

Once you’ve got an ear for dialogue, it’s tempting to fill acres of space with it, to the detriment of action, pace, conflict, and plot. Remember that every scene has to move the story on, so don’t get side-tracked. 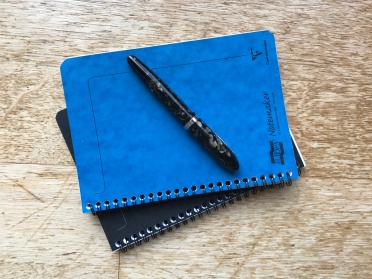 5 Giving overly precise accounts of what characters are doing

Moving people in and out of rooms is a real problem for some would-be authors, as one of my fictional characters, a journalist called Harriet, discovers when she sets out to write a novel.

Suzi pulled the dress down over her distended belly and they all went into the living room.

Whether they walked or sashayed, they surely couldn’t all go through the door at the same time. The setting was only a 1930s semi, not a stately home.  And what were they going to do once they got to the living room?

Suzi sat herself by the window where she could enjoy the last rays of the sun and spy on her mysterious neighbour at the same time.

That was all very well, but if Harriet didn’t mention Theo, Martha, and Greg, wouldn’t the reader wonder whether they were all still standing around like lemons, while Suzi was the only one sitting down?

Theo and Martha shared the sofa, while Greg leant against the wall and puffed on his cigarette as if there was no such thing as a smoking ban.

The guy was a dick to smoke when there was a pregnant woman in the room. Harriet scratched her head. Fiction was ridiculously involved.

When the children had been tucked up in bed, the laundry done, and the dustbins put out, Trevor stretched out on the sofa and allowed himself to be lulled to sleep.

Yep, the reader might doze off too. Active verbs are far more compelling, and often shorter and more precise to boot. The passive voice has its uses, as in scientific papers (This formula is considered an acceptable way of estimating a child’s weight). It’s a turnoff in fiction, though, as with everything, there are exceptions.

It is a truth universally acknowledged that a single man in possession of a good fortune must be in want of a wife.

By this I mean using lots of them; you know, just because you can.

I believe there is a special place in hell for this sin. Semicolons are for connecting two independent clauses, each of which could stand grammatically on its own. It follows that you could, of course, use a full stop instead. Like this one.

Do let me know if you have any other Don’ts for new writers. Meanwhile, happy writing.

How to Write a Book Review

What You Can Learn on a Creative Writing Course