Three days of trudging around Olympia with an increasingly weighty bag of goodies is too long, according to my feet, even when they’re well prepared.

But two days, as I found out this year, isn’t nearly enough. While the London Book Fair is industry orientated, there’s plenty for authors to do. Here are some of my highlights.

1 Catching up with friends and colleagues, many of them from ALLi, the Alliance of Independent Authors. 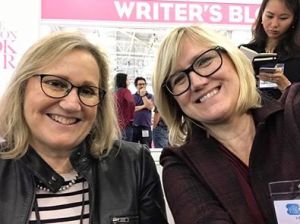 Making new friends is part of the fun too. Book people come from far and wide for LBF, like Aussie writer Rebecca Lang from Sydney.

The varied fare is excellent, and this year the seats even had proper backs for weary spines. Too bad Author HQ is once again tucked away at the far end of the first floor. You may need GPS and Kendal Mint Cake for the trek.

3 Author of the Day sessions.

They’re at the PEN Literary Salon, which is where I met the inspiring Alaa al Aswany a few years ago. Sadly, this year Roddy Doyle had to cancel his appearance, so, instead of a capacity crowd, there were half-empty benches where people collapsed to eat their sandwiches. As ever, there’s a dire shortage of seating, which is why visitors have to perch on the displays.

4 Learning more about organisations like the Society of Authors, Gardners the wholesalers and distributors, or the Booksellers’ Association. There’s a whole world outside sitting at a desk writing.

With a bit of planning, you can also arrange one-to-ones with agents or publishers. There are other ways of publishing too. I should have spent longer talking audiobooks.

5 Admiring awesome new books. There are 20 new books published every hour in the UK. Some of them might even be yours. 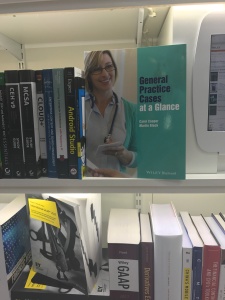 at the Wiley stand

6 Haggling over a bagel.

7 The bottle of Veuve Cliquot I won. This was thanks to Byte the Book‘s legendary networking session on the Tuesday evening. I also collected a dozen useful email addresses and a temporary tattoo.

With many friends and colleagues, I only managed snatched conversations between one meeting and the next. Others, like writers from the Romantic Novelists’ Association, I hardly saw. Next year, I tell myself as I get on the train home, it’s back to a three-day marathon.

On the subject of travel, I can’t resist a digression to add that my novel Hampstead Fever will be on special offer in selected WH Smith travel shops throughout the UK from March 30. That’s buy one, get one half price.

Did you go to the London Book Fair? What did you think of it?