As invitations from a financial adviser go, this one was a tad unusual. But I was looking forward to what His Holiness the Dalai Lama had to say about compassion.

We’d been to the O2 Arena before. As I passed the famous balls at the entrance, I wondered: where on the spectrum between Monty Python and Ed Sheeran would this ageing religious rock star fit in? 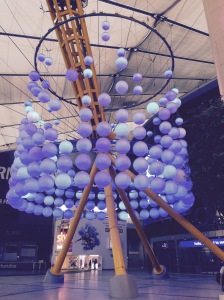 I’d never met His Holiness, as he is called, but I’ve been on first name terms with one of his dogs. As a teenager, I earned pin money walking Chota Peg, a Lhasa Apso given by the Dalai Lama himself to a neighbour of ours. The breed’s distinguishing feature as far as a 13-year old dog walker is concerned is that its back end looks just like its front, which may explain why I never knew which way we were going.

Now, what to wear to hear His Holiness at the O2? My son assured us that the Dalai Lama would surely be content if we rolled up in yellow sheets, but the good people in hospitality would probably expect us to be in clothes.

So, clothes it was.

Protesters formed a tidy encampment outside the venue. 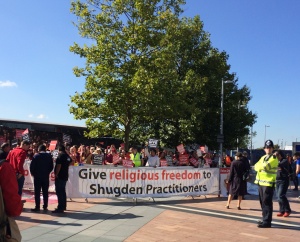 I can’t fault the O2, especially if you’re hungry or thirsty. We poked our heads into the VIP lounge which has a 70s vibe and possibly the best Bloody Marys in the world, though that wasn’t what we’d come for.

The Dalai Lama’s warm-up acts were an amazing singer and a young choir. In appreciation, His Holiness bestowed garlands and pats on the head. There’d have been suspicions had he been a Catholic priest or an iconic DJ.

The real disappointment of the day was the Dalai Lama’s address. Martin Luther King he wasn’t. And I should know.

The audience was there to hear about compassion as the foundation of well-being. But the man was rambling and inaudible, and, without surtitles à la Glyndebourne, almost incomprehensible. Was the sound system at fault? We cupped our ears, straining to catch the words, trying hard to work out which way he was going.

I’ve heard that HH has spoken eloquently on many occasions. Saturday was not one of them. The unstructured address was punctuated by his trademark chuckling at his own jokes. The question and answer session at the end was even worse. If this was the poster boy for peace and harmony, no surprise the world is in such a mess.

However the day was not a total loss. The weather was kind and we’d met some interesting people at the event. Fortified by vodka and friendship, we went on the Emirates Air Line. 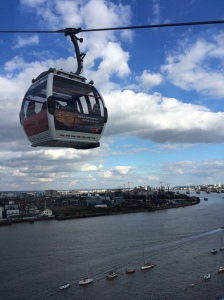 It’s only a ten minute journey in a cable car, during which you can see Docklands and indeed much of London clearly, including the City and the Thames Barrier. I watched the Thames flow, barges glide past, people amble, trains roll by.

We got off at Victoria Docks and visited the Oiler, a bar on a barge. Next to it, people squeezed themselves into wetsuits and tried out water-skiing.

It’s a good place to sit and reflect on peace, and on where to find it.

Easy tweet: What the Dalai Lama Didn’t Say at the O2 http://wp.me/p3uiuG-14C @DrCarolCooper strains to hear him

You may also like:  Dalai Lama says female successor must be ‘very, very attractive’ otherwise she is ‘not much use’; in Times of India.